Last night! Songs that are songs week was back!  This year described as ‘Jukebox’ week!  Borelow’s group were arsey, Nicole’s girl was a Colin Baker tribute act, Sam Bailey took on Whitney and just about came out alive and Louis reigned supreme with two acts left!

Is it just me, or does Giant X look like it’s playing Angry Birds Star Wars? 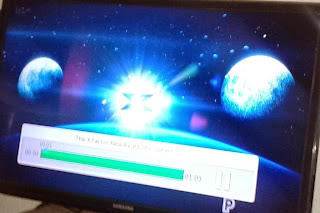 Dermot enters to a very unflattering camera shot from below right up his crotch. I thought we were over that now. His suit – single button.  Does not fit.

The judges arrive. Louis is in a black suit with a pattern on that I quite like; Sharon is in a black dress with chain mail across her bosom and Nicole has come as a black forest with a huge gap in the middle, and has suddenly developed brand new extensions since last night. And Funsponge is here too.

The contestants’ song is Ellie Goulding’s ‘Burn’ and it’s really bad, especially when the women do the high pitched bit and Sam looks like she’s straining to hear the backing track whilst Tamera forgets the words again.

We get a recap of last night. New info: Sam B and Wee Nic are vaguely, kind of, deramped, but only a little bit and are stil mostly praised; Luke and Tamera are treated well and Arsey get a bit of both.  Sharon reckons you can’t pigeonhole Sam B.  I’d say wait until that mothers’ day album of covers followed by a role as Mama Morton, then a tour of Blood Brothers whilst Dead Dad Niki sticks pins in a voodoo doll, with a couple of episodes’ guest stint on Loose Women along the way and maybe a cover of Woman’s Own.

But now!  Time for a “special” guest,  She was a shy young woman with an incredible voice. Well, that’s one word for it. Now she’s CONFIDENT, but, one hopes, not a CONFIDENT MONSTER. [I like how they've airbrushed out of history how her first audition was dreadful and they sent her off to think about what she'd done before coming back - although considering she was equally dreadful the second time around and they still accepted her, I can see why they wouldn't want to draw attention to it. - Steve] It’s Rebecca Ferguson, who apparently has not been erased from history a la Matt Cardle just yet.  Although her sole purpose appears to be to make that terrible group performance seem like a tuneful, competent performance by comparison with this one. Her new song is a total dirge and she is really out of tune and still honks like a goose. This is just DIRE. Its lyrics mainly consist of 'I hope I hope I hope I hope', or as my friend Mark put it on Twitter: I honk I honk I honk I honk. Still, the topless drummers she had on stage with her got Robin Windsor excited on the Twitters. Rebecca shills her tour (who the HELL would go to see that?) and wants Sam Bailey or ‘Tamara’ to win.

Ads: You can see your ‘favourite finalist’ LIVE on tour. Disclaimer: does not apply if your favourite was any of the following: Shelley, Lorna, Tragic Hipster Boyband Abomination, Missed Dynamics.

Durrbot continues the ‘number twos’ theme by telling us Funsponge’s latest album is a great big steaming one. Oh, and Wand Erection are number one.  Durrbot asks who was the best last night.  Louis: Luke; Sharon: Sam and Luke; Funsponge: Sam; Nicole: Tamera. Durrbot asks if anyone has booked themselves a place in the final. Louis says Sam has. Sharon says everyone still needs the votes.

Durrbot introduces our next act as someone who won last year.  The audience have clearly been briefed not to boo, because they all cheer him, and we don’t even get a sincerevoice Durrbot apology on James’s behalf. The hyperbolic text tells us that his LIFE CHANGED FOREVER and he has sold 3 million worldwide (we’re not told 3 million what so maybe it’s 3 million copies of outraged newspapers/magazines). He’s singing from inside a Perspex prison cell full of red light to remind us that he’s been a very bad man lately, which is actually kind of awesome staging, but then he breaks free! James humbleawkward interviews that he’s ‘made silly mistakes’ and wants to thank people for sticking with him including The X Factor and says he’s sorry for abusing his position and not behaving like a proper X Factor winner (LOL).

Ads! A Leona Lewis Christmas album where she squeezes the life out of I Wish It Could Be Christmas Every Day! Just what everyone needs!

Time for the acts to remind us of their journeys. Tamera was in a duo and now she isn’t! Luke is surprised to have got so far! Sam B is doing it for her family! Wee Nic used to be at school and now he’s here! Arsey don’t want the dream to end! (Now I’m just wishing ArseTAT could come back and join them so they could be Union Arse).

Oh why we’ve had a whole second of useful content, so it must be time for the ads! Is Cat Deeley’s NO I DON’T WANNA CUT MY HAIR MUMMY CAN’T MAKE ME shampoo ad thing meant to be her resembling a whiny six year old?

Sing-off time and Tamera is singing ‘The Voice Within’ and you can definitely see why they thought she had potential to be world class, but I still think she’s a couple of years and some proper training away from that yet. It’s rough as all hell but it shows she has some potential and is the best she’s sounded in several weeks. She does the classic sing off bending over double move and screams up her lungs but it's just never the same as when Katie Waissel did it that time.

Luke wheels out the Journey South memorial guitar of irrelevance for his ‘Run’ and then chucks it away and starts stomping around the stage. It’s all quite shouty but he is at least putting in a lot of energy and is quite earnest about the whole thing in that special way that teenage muso boys are.

Nicole says Tamera gave a stunning ‘save me’ performance and Luke is a real giver but she has to send him home. Louis says Luke won the sing-off and he’s easily the best person on the stage, and it’s WRONG, so he’s sending home Tamera. Sharon says she is basing it on the sing-off and there was an ‘organic performance from a singer-songwriter-musician’ so she’s saving Luke and sending Tamera home.

Funsponge says he’s 50/50 as he likes them both and Sharon and Louis whine at him to decide.  Funsponge says it’s time to invoke FUCKING DEADLOCK for the first time in the series, so sends home Luke. The act with the fewest votes is Tamera, which means Nicole is the first to lose all acts – I thought it was going to be Funsponge, but, as we all expected, it looks like it’ll be Louis/Wee Nic vs Sharon/Sam for the win, unless Arsey can build enough of a following to do something of merit in the final. Tamera’s best bits don’t include much of her lyric forgetting or tabloid scandals. She thanks everyone for the opportunity. Nicole says she will be the most successful star to come out of this show. Somewhere, One Direction (and even Jedward) are all 'Mm-hmmmm'.

Number 2 theme continues with Borelow losing to 1D (happiest day of my chart life, surpassing Bob the Builder beating Westlife to Xmas #1 circa 2000).
Union Arse = priceless! Or maybe they could be The Arse Risk, though that would sound too STD...

I'm holding out for Mr and Miss RiskBixMix